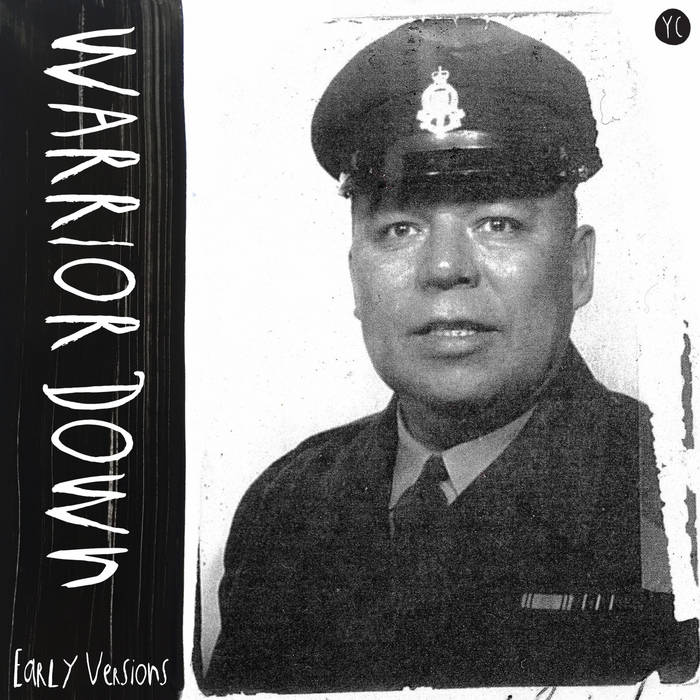 Warrior Down was a long time coming. Maybe you've heard us say that before? It's true though. We've done a lot of fun projects over the years, and made it a goal to see as much of Canada as we possibly could before branching out into new and unknown places. Us and our old diesel vehicles. In many ways Warrior Down is the culmination of this work brought about by years of touring.

There's a lot to learn in this so called country. Many stories to be told. Most stories haven't been told at all, and certainly not by the people who should be telling them. WHOOP-Szo has always been the vehicle for me to reach out into the depths of my awareness and shine a light on those hints of truth. I didn't get to know much about that truth growing up and can't much speak for them now, but I sure as fuck try.. Truthfully you can't do anything for community until you do it for yourself. So Warrior Down is really and brutally about coming to terms with my own identity, and doing so through the vessel of my family, my own experience, and from many far reaching places not currently covered by the Canadian lexicon; if anything romanticized. Over time, we've found a story or two tell. All by putting in the miles.


There's no better place to find yourself than in a song, where your thoughts can be their own, and where stories will find you where you are. Please enjoy these early incarnations of songs from Warrior Down - here now in the raw and truly sporadic version of itself. Each story only one story. One voice. A confused kid trying to reconnect and be ok.

Our first album (Qallunaat) was recorded in the Northern Village of Salluit, Quebec. This song opened that record and featured a young Ungava Bay Inuit community leader named Larry T. He was just 14 at the time. It was really fun to work this song out with him after school, and give him total freedom to say whatever he needed to say. His words helped set the tone for the weird and disjointed record that would ensue. Named for the school located in the centre of the village, Amaruq sadly, is now a lament for our friend Larry who took his own life just last year. Several students and community members we grew to know are gone now and that's a real sad reality for some many young people in the North. Unfortunately this is nothing new for Indigenous people all over Turtle Island. If we could trade this song for Larry and all the others we would. Until then, we honour them and live our best life.

In between varying plane flights to the north, we would spend some time in Guelph. For two holiday seasons in a row, we would record bed tracks to take back north with us to work on throughout the year. 23e was caught live off the floor on a 1/2" 8 track by Kirsten's dad, Harri during one of these sessions. We didn't do any recording for this one in Salluit so it was never included in our albums from that time. It's a shame because it's probably the song that most represented our live band back then and was probably my favourite recording of ours up to that point. Written on a dock in Mac Tier on acoustic guitars and a generous helping of 2cb, we initially mis-titled the song as it appears here. It's a funny little song about the confusion between reality and nature; crossing some wires and making it a little more livable.

It was 2014 and I had just moved home. Our band had lost our original line-up, despite the fact that we had over three albums worth of material and a release tour well in the books. Through Out of Sound Records we had been doing some cool work helping build up the London music community. London was such a pleasant surprise and the bands and scene were really great. I was doing sound at a local venue and had met Andrew and Joe my very first night working. We've been friends ever since. Through these friendships I had a place to land when things were unclear. Eventually, we got together and started working out a short set to tour. Odemin was one of the loftier tracks and so it is more than fitting that this would be the first song we would record with Eric on drums. He was still 18 at the time, which was a real pleasure for us to be on the road with a fresh and eager player. We recorded this in Port Greville with our musical soulmates Construction & Destruction. We did our whole first East Coast tour with them, and have remained great friends to this day.

After a couple years of playing with each other, touring, doing residencies and a slew of 7" and tapes, we were about ready to start making what we wanted to be our first LP with the new band. This record was supposed to be Warrior Down, but it never came to be. Instead we did a bunch of sessions and worked out what would become Citizen's Ban(ne)d Radio,. It was more a series of demos or something of a band compilation. We released it on a whim and in hindsight we really like that record! During those sessions we recorded a bunch of songs in the house we were living at the time; on a busy corner in London. We converted the whole house to a studio, and those with day jobs, often went to bed with amps blasting in their closet until the wee hours of the morning (sorry Dev!). Here we recorded some of the drums tracks that would become side A of the Warrior Down record. This version of nshwaaswi was never released. Live off the floor and mixed by our old friend Nathan Lamb we almost kept this version, because it has a real spirit to it. We didn't know the song at all when we recorded this. We didn't know how to start or end it and never intended on using it. We were just messing around and things started to feel ok. We kinda kept those rough idea's to recreate the album version which is a testament to this initial moment.

In 2016 we were on the road for about 35 weeks. It was a lot. We did two residencies in the maritime provinces; one with our great friends at Flourish Festival followed by a trip back to Port Greville to work with one of our favourite maritime artists, Jon McKiel. This time for the Greville Tapes Music Club. For this collaboration Jon brought an old TEAC 4 track and we recorded two of each others songs. The songs we did with Jon remain some of our personal favourite recordings.You should check them out. He joins us for some guitar on Homemade Candles, a song we wrote about staying with our dear friend Luke amidst his gnome-like qualities. He makes magic candles and they are a big part of the spiritual energy we share with each other. We also recorded one of Joey's songs, The Dive which is about the Saint John River, which we lovingly refer to as the Wolastoq, as taught to us by the local Maliseet communities.

Finally, I'm happy to share this live, acoustic tape recording of the song Gerry. Recorded in my home during the Winter Spectacular festival in 2016. Headlined by Jennifer Castle, and preceded by the screening of a local music documentary called Et-Tu Dude by Travis Welowszky. It really was a spectacular evening. I was an emotional mess. I admitted some tough things in that movie, and it was hard to share that with my community, a hundred of whom were in my house that night. After the film and before we played, Eric held me backstage while I cried. He's been there for me a couple times like that. Big men, touching base. Gerry was the first song I wrote at home and I talked a lot about Gerry that night. How he gave me my first guitar and how he was murdered by an RCMP officer... inside his home. I've shared this song a lot and people really like to ask about it. That it's only becoming relevant now 5 years on........well, it may be bringing light to the issues, but mainly brings a lot of pain over the loss of someone. There is no retribution. Music is supposed to heal, or mainly I think that it can and this one let's out a lot, but I think it would have been just as well to keep this one for myself. If there were one version I would want to share now, it would be this one, in the room where i wrote it.

Odemin - Recorded and Mixed by Dave Treneman and Colleen Collins

nshwaaswi - Recorded and Mixed by Nathan Lamb and Adam Sturgeon

Bandcamp Daily  your guide to the world of Bandcamp